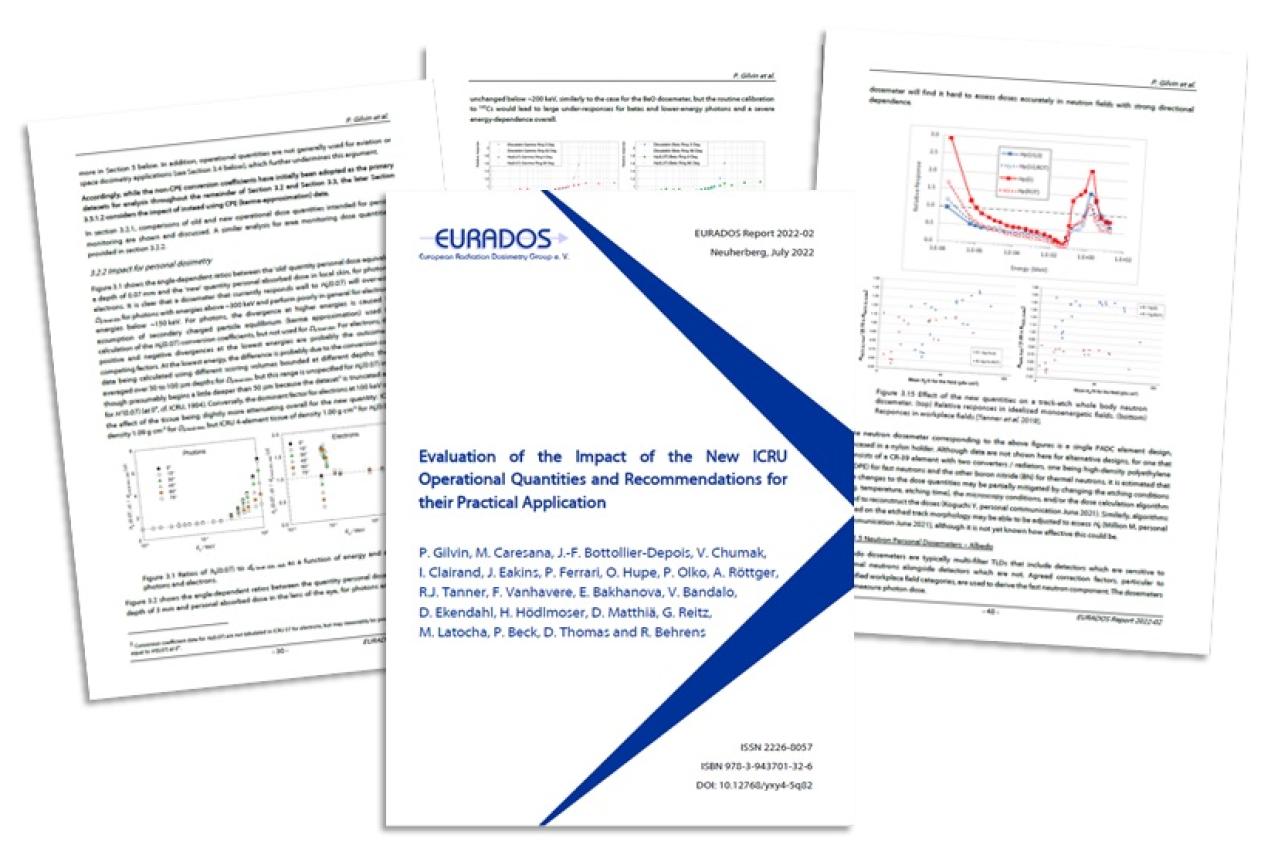 During the later stages, EURADOS were invited to comment on the implementation of the new quantities, and accordingly set up a task group that drew on expertise from a number of the existing EURADOS working groups. The result was EURADOS Report 2022-02, published on the website in July 2022. The report examines the major differences between the old and new operational quantities before going on to examine the effects on: instrument and dosemeter design; calibration and testing practice, and standards; radiation protection practice; and regulation.

Amongst our conclusions, we agree with ICRU that a suitably long period be allowed for any transition to the new quantities. We also note that an extensive programme of education and training will be needed. In dosimetry, it seems clear that the secondary “kerma-approximation” set of conversion coefficients for photons will be most widely used. Over the energy ranges covered by the existing operational quantities, this will reduce the practical difficulties of re-designing instruments and dosemeters, which otherwise would be significant.

Our webinar discusses some of the above findings, and highlights areas where work is still needed in order to fully understand the implications of the new quantities. We go on to report on an evaluation of the responses of some real dosemeters in terms of the old and new operational quantities, before looking at the likely effects on radiation protection in medical interventional procedures.

Phil is the former head of the approved dosimetry service operated by UKHSA and its predecessor organisations, and is also a former chair of EURADOS Working Group 2. He obtained a degree in physics with astrophysics, and a PhD in instrumentation for x-ray astronomy, before joining the UK National Radiological Protection Board in the mid-1980s. There he worked on the development of PADC (CR-39) neutron and radon dosemeters, later moving into the large personal dosimetry service. As well as managing the service he oversaw a number of major projects, including one to completely replace the main dosimetry system, while contributing regularly to professional level training courses. As well as serving in EURADOS Working Group 2 since 2010, he has acted as steering committee member for the European ESOREX studies, taken part in an IAEA mission, and provided technical expert assistance to an accreditation body. Having managed UKHSA’s approved dosimetry service for over 20 years, he now acts in a technical support capacity.

Marco Caresana graduated in physics at the University of Pavia in 1989. In 1991 he started working at the Department of Nuclear Engineering of the Polytechnic of Milan. His main research activities are in the fields of radiation measurements with particular focus on developing innovative instrumentation for personal and ambient dosimetry in mixed and pulsed radiation fields around high-energy accelerators. Since 2015 he is associate professor at the Department of Energy of the Polytechnic of Milan. He is the scientific director of the Radiation Metrology Laboratory of the Politecnico di Milano. Marco is Chair of the EURADOS WG11 since 2018.

Mahmoud received a Ph.D. degree in engineering science and technology from University of Liège. He subsequently joined the radiation protection dosimetry and calibration expert group of the Belgian nuclear research center (SCK CEN) as a researcher. His research interests include computational radiation dosimetry, Monte-Carlo simulations, machine-learning and computer vision for dosimetrical applications.